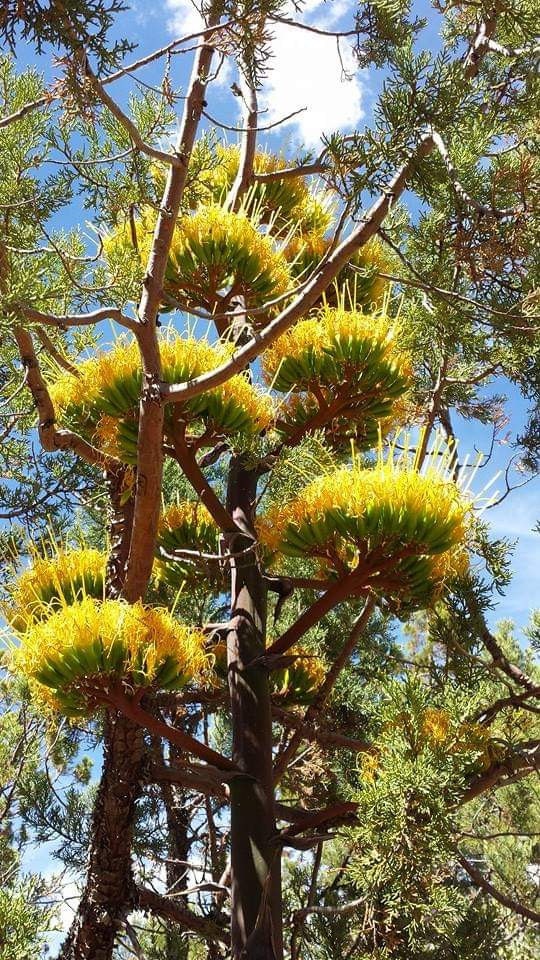 Missing the desert today and all the native plants. I miss the smell of chaparral in the rain and seeing agave blooms on tall stalks high above my head.

These agave flowers were growing well above me hiking near the mogollon rim. It's truly a sight to see!

Agave has been used for centuries. Most well known for mescal & tequila and its nectar used as a flavoring and sweetener with a low glycemic index in the modern day, native populations have also been aware of its health benefits and traditionally used it medicinally.

The Aztecs and Mayans used agave juice and egg whites to make a poultice that was then laid on wounds to speed healing. The Aztecs also used a mixture of agave nectar and salt as a dressing for wounds and a balm for skin infections, and the use as a folk remedy persists today.

Modern medical study has confirmed agave’s remedial properties. Agave nectar applied to the skin has been found effective against pyogenic bacteria such as Staph aureus. The tradition of adding salt to the nectar has been found to further boost its anti-microbial property. Agave nectar has also been proven effective against enteric (intestinal) bacteria.

Traditionally, it was used internally to treat ulcers, stomach inflammation, tuberculosis, jaundice and other liver diseases, syphilis, and menstrual problems. Additionally it is used as a treatment for high fever by inducing sweating.

A poultice made from the root and the leaves are often used to treat a toothache.

Although fresh agave may act like a laxative, the dried herb can also be used as a treatment for diarrhea and dysentery.

This medicinal herb is also the source for hecogenin, a compound used in the production of many steroidal drugs.

An extract of the leaves or the roots can be used to make soap. The plant contains saponins, which can form a lather in water that’s sometimes effective for cleaning. The leaves or roots are cut into small pieces and then simmered in water to extract the saponins.